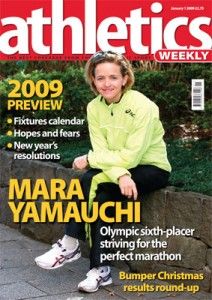 Posted at 12:03h in Uncategorized by adminva

The news broke yesterday via Mara Yamauchi’s blog that she has decided to retire from elite distance running. 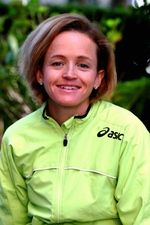 Mara was a regular patient at Tokyo Physio over the last few years, seeing the physiotherapists and massage therapist for treatment on a range of problems. We worked closely with the UK elite athlete medical team in London who were overseeing Mara’s care. We were particularly proud of helping her overcome some complicated hip issues in her lead in to the Beijing Olympics in 2008 where she placed 6th in the women’s marathon, the highest finish by a British athlete (male or female) in an olympic marathon. Mara sent us a lovely email yesterday thanking us for the support of the years, which we were thrilled to receive.

Mara’s story  is inspiring; having risen through the running ranks of social runners to being one of the world’s best, through hard work and perserverance. If her elite career did not run almost concurrently with current women’s marathon world record holder Paula Radcliffe’s, she would likely be a household name in Britain.

Mara was born in the UK but spent the first 9 years of her life in Kenya – no doubt the Kenyan surfaces and barefoot running gave her a great base of strength and endurance which stood her in good stead throughout her life. She graduated with a Master’s degree in political economy and began working in the foreign and commonwealth service and eventually was posted to Japan in 1998. Mara married a Japanese runner/coach and she began taking her running increasingly seriously, moving to part-time work and eventually taking unpaid leave to train full time in Japan. Her husband would ride beside her and handle all sponsorship negotiations so Mara could just concentrate on her training.

For foreign runners in Japan is was great to have someone who was ‘one of us’ performing with the world’s best and Mara used to come out to some of the Namban Rengo training and social events.

With the true extent of doping in the top level of sport becoming more apparent, those who know Mara and her background can be assured she was always clean, and more than likely raced (finishing behind and in front of) runners using performance enhancing drugs. Mara can hold her head high on her athletic career, and look back on it with pride for the rest of her life. 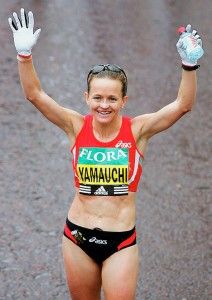 Mara returned to the Uk to train in the lead in to the London olympics, but unfortunately had to retire from the race due to a foot injury.

Mara has returned to her diplomatic work and plans to continue running and competeing as an age grouper. We wish her all the best and hope she comes back to run with us in Tokyo again in the future.